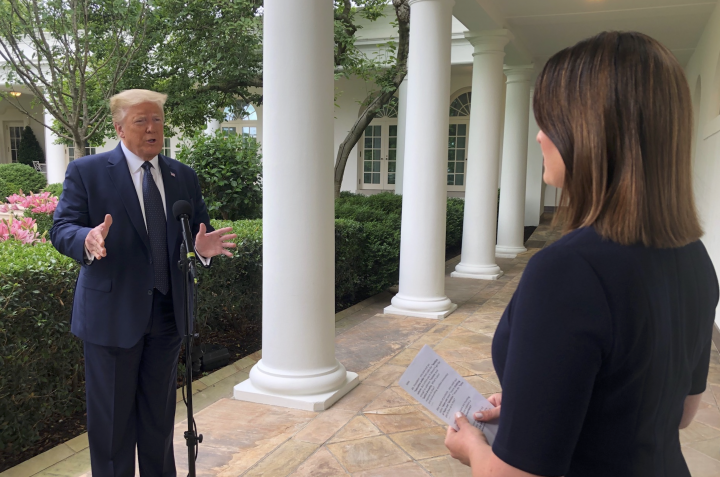 JACQUELINE POLICASTRO: Mr President, you put out an executive order that calls for police reform, but critics say it doesn't go far enough to address racism and police brutality. What's your response to that?

PRESIDENT DONALD TRUMP: Well, we need strong police. We have to have very strong police and if we don't have that, once you get over that certain line where you start losing people that work for the police force, we have unbelievable good people in the police force. And of course, like everything else, you'll have some bad apples. They're very few, but sometimes you find them and we have to find them before they act. And we've really passed something quite strong. We did it in conjunction with all of the police and sheriff's associations. By the way, they want it more than anybody. They want this more than anybody. So we stick with our law enforcement and we've done that very strongly.

At the same time, we very much want to stick with our communities and that's what we've done, because the communities, people don't understand this, the communities more than anything or anybody else, they want strong law enforcement, because they're the biggest recipients of horrible crime. So we've worked at both, yesterday, as you know, I had the law enforcement people here, great support. And I had a lot of the parents of young kids, their parents are devastated, like devastated, I had quite a few people that you've seen in the papers recently, and it's tragic. They have been absolutely devastated, and seeing them both together was a very interesting thing. But law enforcement is very important for communities where there has been just devastation. It's terrible.

JACQUELINE POLICASTRO: After weeks of protest, you said our nation does not need more stoking of fears and division. How do you plan to live up to that?

PRESIDENT DONALD TRUMP: Well, you know what, I'm doing so much now, and I'm devoting so much time to it, our jobs and working so that our economy comes back. It is rocking and rolling. It's coming back. Yesterday we had tremendous retail sales numbers. It was up 17.7%, which is more than double the projection. Nobody could even believe it. And the stock market went up, and the stock market soon, going to be as high. Hopefully it'll keep going as it was pre- the Chinese plague coming in because when the plague came in, the whole thing changed. So I have to build it. Once I built the greatest economy in the history of this country and the history of the world, and now I'm doing it again and we'll top it and we'll top it very soon.

JACQUELINE POLICASTRO: Millions of Americans are hurting financially. Will you support a second stimulus payment?

PRESIDENT DONALD TRUMP: I would do that, and we expect to do that at some point in the very near future. We're coming up with some concepts now and we expect it to be bipartisan. We think we're going to get it done.

JACQUELINE POLICASTRO: Coronavirus cases are rising in 22 states, including Oklahoma, where you plan to hold a big rally this week. Aren't you worried about people getting sick?

PRESIDENT DONALD TRUMP: No, because if you look, the numbers are very minuscule compared to what it was. It's dying out. By the way, we're doing very well in vaccines and therapeutics also, I think there's going to be some big announcements on that in the not-too-distant future. But no, we're not concerned. Actually, Oklahoma has had a very low rate relatively speaking. It is a little spike, a small spike for a specific reason. But no, we had over a million people apply. They have people now, days ahead, lined up. They have big lines of people, over a million people tried to get tickets to the event. We'll go there, everyone is going to be safe. They have to be safe. They want to be safe. We're doing temperature checks. We're doing a lot of different things where I think we're giving out face masks. We're doing a lot of things, but Oklahoma, one of the reasons we chose it is they've been very low in terms of, and they've done a really fantastic job. The governor has done a fantastic job.

JACQUELINE POLICASTRO: You're behind in the polls in most battleground states right now. What's your plan to catch up to Joe Biden, and will you debate him in the fall?

PRESIDENT DONALD TRUMP: Well, it's like with Hillary. I was behind in the polls in the battleground states and every poll. And then I ended up winning all those states. You remember that well. And winning states that I wasn't even supposed to be in play. We won Michigan. We won Wisconsin, great states. And so, we were behind, and I don't believe we're behind because in my polls, we're ahead. We have polls, and in my polls, we're ahead. But polls are fake, just like the reporters and the news are fake. There's so much of it that's false. And that excludes you of course, but the polls are fake and they're called suppression polls. They're supposed to take people's enthusiasm away.

And when you look at that phony CNN poll that recently came out and you look at some others and where they go and interview Democrats or take polls, Democrats at far greater numbers than Republicans and other things, many other things. This oppression polls, no. We're ahead in our polls and some others too, by the way. But we're ahead in our polls. And especially in the battleground states, I think we're going to do very well. I find there's much more enthusiasm now than there was even in 2016.

JACQUELINE POLICASTRO: And quickly, can I just ask, do you think we should make Juneteenth a federal holiday?

PRESIDENT DONALD TRUMP: A number of people have asked me that question, we'll take a look.

JACQUELINE POLICASTRO: All right, thank you, sir. I very much appreciate your time.

PRESIDENT DONALD TRUMP: Thank you, thank you very much.

Exclusive with Ivanka Trump: Federal hiring to focus on skills, not degrees

Exclusive with Ivanka Trump: Federal hiring to focus on skills, not degrees